So Who Is Bruce?


About a month ago, my girls were playing in the front yard with their friends, and they came running into the house claiming they’d found a cat. From a distance, I thought, “No, that’s the neighbor’s cat” because that cat (named Carrot) is also an orange short hair, but Coryn assured me, “No, Carrot has green eyes. This cat has yellow eyes.”

When I got closer, I could tell she was right. Not only because of the eyes but because this fellow was skinny and had a swollen ear. We fed him some of the neighbor’s cat food, but the neighbor said she didn’t want another cat … so impulsively, I snatched him up and put him in my garage.
“I found us a new mousetrap,” I told Matt.

And Bruce has been with us since.

For a day or two after we found him, Bruce went by “Meowy,” which was the name my three-year-old preferred, but after trying on several names, we finally settled on Bruce Wayne. We did post his picture to a local lost pets page, but didn’t have any bites. We really need to make him a vet appointment and maybe check for a microchip, but we haven’t had the funds for a vet bill, and now we’re very much to the point of wanting to keep him.

Bruce is extremely well behaved and affectionate. He’s an indoor/outdoor cat who will meow to be let out then come back in when we call him for dinner a few hours later. The first time he wanted out, I was worried he wouldn’t come back. After all, he obviously got disconnected somehow from his first owners (he’s full grown and much too friendly to have been born a stray or have been living in the wild for any length of time … though he was underweight when we picked him up), so I was worried he’d run off. He’s always come back, though. He sleeps on my desk while I write, which is nice.

At first he wasn’t crazy about our German Shepherd, Caen, but now they seem to tolerate each other (well, Caen would like to be Bruce’s best friend, but Bruce has so far said, “Oh heck no” in response to Caen’s attempted affection.). My biggest concern is our upcoming move, which can be hard enough on a cat, and I can’t see it going well for a cat who has only recently established himself with our family. I do really really really want to keep him though. 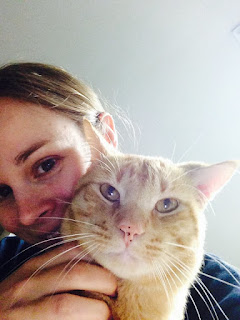 Also he's done wonders for my social media interactions. Facebook posts involving Bruce shoot to the top of my "most viewed/most engaging" list in no time. My number one marketing tip from all that I've learned this year? Get a cat. 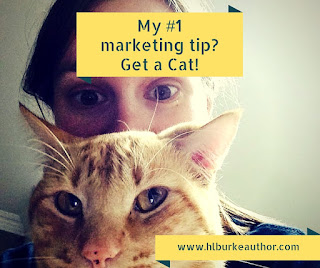