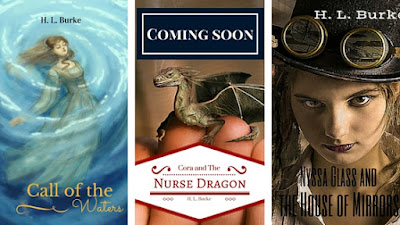 I don't really do new year's resolutions. I'm not really into guilt trips and manipulation, even when they come from myself, and like to maintain a really flexible lifestyle. I'm also lazy.

However, I'm also at the stage of my writing career (I still feel like I need to put that in "") where I've learned how to meet deadlines, finish projects no matter what, and basically predict when my next books will be ready with decent accuracy. So there won't be any specific dates here, but just giving you a general idea of what's to come in 2016 ... (the covers also are mockups using concept art, not the finished project) if you want to be up to date on all thing H. L. Burke, use the form below to sign up for my monthly author news email.

So here are the upcoming books: 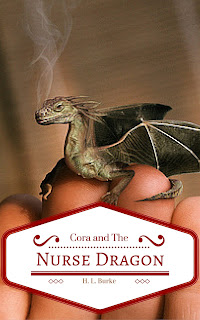 Cora's a young girl with two dreams: to be a dragon jockey when she grows up and to own a pet dragon now. She constantly buys "egg packs" at the dragon emporium in hopes that one will hatch into a rare pet-sized dragon, but only gets short-lived mayflies. However, when an unexpected egg does develop into something new, Cora may be over her head (age of intended audience 9-12).

I've mentioned this a few times because it was my NaNoWriMo project for 2015. I consider it kind of a stepping stone between Thaddeus Whiskers and the Dragon and Beggar Magic, as far as the maturity of themes and intended audience.

The book is written and been through the first round of betas. I'm confident I'll be able to release this in the early portion of 2016. 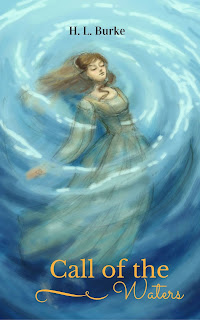 It has been almost a decade since Karvir's sacrifice ended the war between the Fire Elementals in the Humans. The cost was his human form. Now he lives in hiding with his family, protecting the young girl, Pet, whose powers allow her to open up portals between the different Elemental Realms.
Their safety is challenged, however, when Karvir's estranged Father-in-Law Eanan arrives with a story of a mystical gateway to the Water Realm. But will the Water Elementals be friends or foes?

This is the one I'm the most eager to get out. It is written and is in the early rewrites/edits stage. It's a strong follow up to Lands of Ash. I'm hoping to have it out no later than March ... and I'm also hoping to have the third book in the same series (yet unnamed) available late next year.

Nyssa Glass and the House of Mirrors 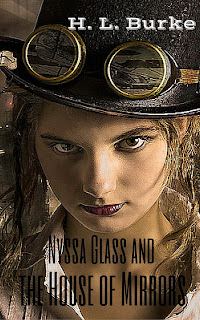 Nyssa Glass is a reformed cat burglar turned electrician's apprentice, settled into a life repairing videophones and radio-sets. However, when her past comes calling, she finds herself forced into one last job. No one has entered Professor Dalhart's secluded mansion in almost a decade, at least not and returned to tell the tale. If Nyssa wants to ensure her freedom, she'll brave the booby trapped halls and mechanized maids. Nyssa has skills, but this house has more than its share of skeletons, both literal and figurative. As she steps into the cobwebbed halls lined with dusty mirrors, she has to wonder. Is the House of Mirrors really abandoned?

This is my currently-writing project, but I love how it is coming to life. In someways it is a follow up to Beggar Magic in that it is YA and Steampunk (though it is a lot heavier in Steampunk elements than Beggar Magic), but it's also very different from other books I've written. I'm really excited about it. Hopefully this will be available mid to late spring.

Born with a disturbing lack of visibility, Princess Elaina of Thale had a childhood filled with quacks and charlatans, all promising to reverse the curse. When her parents determine that the answer to reversing her invisibility lies in matching her up with a perfect prince, Elaina decides she has finally had enough. She will drive off any suitor who dares to approach her. Nothing, however, has prepared her for the suspiciously ambitious Prince Randolf or for the charming stablehand, Jeff, who wins her friendship. Before she realizes what is happening, Elaina is swept into an adventure with her father’s crown and her very existence at stake.

This is a rewrite. The follow up to An Ordinary Knight, The Invisible Princess was written roughly the same time (around 2007), so it is completely written, but in need of a desperate edit to polish up the writing and tone down some melodrama. Still, seeing as it is a basically finished book, it won't take me long to prepare, so you can expect this book in mid-to-late Spring.

So that's four promised books. I also plan to get out book three in the Elemental Realms series out by the end of the year, a couple more shorts ... and whatever else pops into my head. I'm really excited to continue sharing my stories with you!
Labels: 2016 books fantasy new releases new years resolutions steampunk writing