Today we have passed the Gourd of Transparency to Alyson Bowen. Take it away!


Author Bio: As a full-fledged geek, Allie May’s love of fantasy developed at a young age due to her obsessions with Disney, superheroes, Star Wars, and fairies. She began reading at the age of four and started writing as soon as she could hold a pencil. In high school, she won a writing contest and some of her poems were published in a Creative Communication anthology. With the help of a little magic and a lot of Dr. Pepper, she turns her vivid dreams into stories to combat her hypergraphia (the overwhelming compulsion to write). When she's not writing, she's either reading, watching Netflix, playing with her dog, or at Disneyland.

1. If you could enter any fictional world, which would you choose?
Star Wars because I would totally be a Jedi and it would be awesome.
2. Favorite flavor (of what? EVERYTHING!)?
Does Dr. Pepper count as a flavor? Cause technically it's 23. Though I was really tempted to say Mango just to finish the Psych quote.

4. If you had to write only in one crayon color for the rest of your life, what would you choose?
Perry the Platypus Teal.

5. If you could live inside a theme park ride, which would it be?
Radiator Springs Racers at California Adventure. I could ride that over and over again. Plus the animatronics are not creepy like when I got trapped on Pinocchio over the summer. It was terrifying.

6. If I were to invite you over, what snacks would you bring, keeping in mind that fruit and dried fruit are not snacks?
Another Psych quote! Brownies. Because who needs "snacks" when you can have dessert?

7. You can combine any two creatures into a new hybrid. What do you make?
A fluffly dragon/dog hybrid so it cuddles with me and loves me like my dog, but it also flies and I can ride it anywhere so I don't have to drive because I hate traffic.

8. You're the next Disney princess. What fairy tale is your full length movie and how would you use your new ability to control woodland creatures?
Yay! The Goose Girl by the Brothers Grimm because Shannon Hale's version is amazing and I feel like I lived it in high school. But it's okay because obviously I'd use my new woodland creature army to take over the world and crown myself Supreme Overlord Queen and while my animal army would take care of business, I could get some writing done..

9. If this question were any question in the world, what question would you want it to be and how would you answer it?
Question: Your favorite? Favorite what? Favorite.
Answer: R2-D2

Powerful: When Princess Kylanore was seven, her parents were arrested by the Council of Four for their plans to overthrow the Four Kingdoms using her brother, Eli, as their all-powerful weapon. When she is sent to attend Floures Academy under the watchful eye of the Council, she risks the discovery that she is just like her brother. When Eli suddenly returns with news of buried secrets and corruption throughout the Four Kingdoms, she has to make a choice: Will she keep quiet to protect herself, or will she join Eli on his renegade attempt at justice?

~Allie May (aka Alyson Bowen) 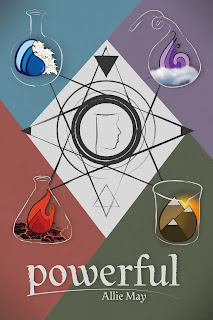