Today we salute Jennifer Kibble, who enters our arena bearing only her sword and her awesome answers.

Jennifer is a geek at heart. She has used this love for video games,
reading, the fantasy & science fiction world, and used it to help fuel
her passion for writing. Jennifer started to write short stories in
the fifth grade. Her career as a writer turned serious after a trip to
witness the launch of the space shuttle Discovery. This set into
motion the mindset to do what she loves. In her free time, Jennifer
enjoys playing video games, reading, D&D, and listening to music.
Mages of Vane is her newest book in the Phoenix Element book series. 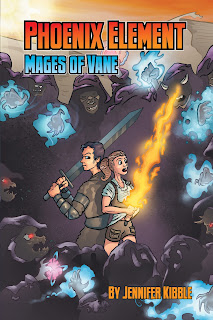 1. You can rescue a fictional character from certain death orresurrect them to live again. Who do you save? Alternately, is there a
fictional character deserving of death who you would like to destroy?The horse from Neverending Story, Artax. I loved that movie when Ifirst saw it. But that scene with Atreyu and his horse in the swamp ofsadness makes it very hard to watch that movie again. Jar Jar Binkswould be an obvious choice for the character that needs to die. Yea,I'm going to stick with my answer.2. Fill in the blanks.. (I am a were...but I only turn when ....). I am a were vogon but I only turn when the answer is 42.3. You are given a magical whistle that allows you to pick threecreatures, real or imaginary. You get one to be your companion/mount,
one who you can transform into at will, and one you have to engage in
a fight to the death. Catch? You don’t get to pick which is which.
What three creatures do you choose?A dragon, a hippogriff, and a phoenix.4. Who is your fictional best friend and what activities do you chooseto do together?Tasslehoff Burrfoot is the first name that comes to mind. Thischaracter is from the Dragonlance series by Margaret Weis and TracyHickman. A pure free spirit if there ever was one. Tasslehoff'swanderlust is infectious to both his friends and the readers. I can'tsay what we would do together but it would be filled with spontaneousadventures! And dragon riding. Providing that I don't get motionsickness first.5. What’s the most important lesson you ever learned from a cartoon?"There's no point in being grown up if you can't be childishsometimes." Wait, no, that's Doctor Who. "Never forget who you are"from Disney's Lion King. As well as "Remember who you are." Life ishard but at the core, I've learned to never forget who I am, where Icame from, and how I got here.6. Most RPGs have three basic classes: healers, who heal; tanks, whoprotect other party members from damage; and dps who damage the bad
guys. Which are you? Points if you’ve actually played an RPG and can
tell me about your in game character.I love playing RPGs! Both in video game format and table top. I tendto play solo a lot in MMOs, and over the years, the best type ofcharacter to play in a group and on my own is a dps character. Tanksare too slow, healers are squishy, but the dps character is justright. Whenever I play any time of RPG, be it online, or otherwise, Itry to be well-rounded. Besides, there is too much responsibility forthe tanks and healers.7. The Flying Dutchman is offering you three wishes. How do youmaximize your wish potential?Teleportation powers (traveling made simple!). Super powers, becausewhy not? Aaaaand....(I'm always bad with the three wishes question)advance NASA by fifty years.8. If you favorite historical era had an ice cream flavor made in itshonor, what would it taste like?Armadillo Surprise, tastes like leprosy.9. If this question were any question in the world, what questionwould you want it to be and how would you answer it?Should Hollywood stop with all the remakes of movies/shows from the1990's? YES!!!! Pull stories from books instead.Links:Phoenix Element Blog - https://phoenixelement.wordpress.com/Phoenix Element on Facebook - https://www.facebook.com/thephoenixelementPhoenix Element: Mages of Vane on Amazon -http://www.amazon.com/Phoenix-Element-Mages-Vane-2/dp/1516842235/Phoenix Element: Normality Twisted on Amazon -http://www.amazon.com/gp/product/B011LNG3M8
Labels: fantasy funny humor jennifer kibble random interview reading writing