Today we climb the Mountain of Mystery to sit at the feet of Meg Welch Dendler and drink in her wisdom.

During an Alien Invasion what would be your weapon of choice?
Well, if you’ve watched “Signs” you know that it’s water. My daughter leaves glasses of water all around the house like the girl in the movie, so we’d be all set. On a more pragmatic note, probably a big machine gun. Unless they have some kind of force field protecting them, then we are all just screwed. Of course, in my books the cats are aliens that want to invade, so maybe just a bunch of balls of yarn.

Write me some Vogon Poetry (for those not in the know, Vogon poetry is so awful you’ll want to rip your ears off and eat them. It’s considered a method of torture in many corners of the galaxy. So give us your worst).
My haiku poem for socks.
Socks go on your feet.
Socks get lost in the dryer.
I hate socks.

Okay, maybe it’s not the worst ever, but my friends who consider themselves poets would hate it. I’ve won first place in poetry contests, but not for this one. Definitely not for this one. Though I do hate socks.

You are given a magical whistle that allows you to pick three creatures, real or imaginary. You get one to be your companion/mount, one who you can transform into at will, and one you have to engage in a fight to the death. Catch? You don’t get to pick which is which. What three creatures do you choose?
I’m pretty squishy and non-violent, so maybe I just have to assume I would lose the fight to the death and go from there. I’d want to be sure that any fight to the death would be quick, if not painless. Not a house cat. I could never kill one, and it would play with me and really drag out the whole fight to the death process. It could take days. So a dragon, without question. Fiery breath and BAM it’s done, and being one would be fantastic. Don’t even get me started on riding one. There are no words for that dream. A tiger, because they are awesome to have as friends and will chuff and rub on you but would kill me with one bite and be done with it. And a unicorn. That horn would end the fight quickly, she’d be perfect to ride around and hang out with, and being one would surely give me some kind of magical powers. Dragon. Tiger. Unicorn.

You find a talking animal. What sort of animal is it and what’s the first thing you do?
This time I will go with a cat. The first thing I would do is ask about all those things I think make her crazy and see if they really do or if she is just being difficult. I’d also want to know what’s up with jumping other cats after they use the litter box. Are cats just bullies, or is there some deeper meaning?

Rename yourself. Your new name can be silly, pretty, meaningful, whatever you want, but it CAN’T be your real name or penname, no matter how awesome that might be. Sorry, Beezow Doo-Doo Zopittybop-Bop-Bop is taken.
The first thing that comes to mind is M’gret because that would mean that I had impressed a golden queen dragon in Anne McCaffrey’s universe. That’s much better than just having a stuffed one sitting on my desk.

You can rescue a fictional character from certain death or resurrect them to live again. Who do you save? Alternately, is there a fictional character deserving of death who you would like to destroy?
I don’t read a lot of books where characters die, so this one is hard. I think Hazel in “Watership Down” because it is so ridiculously sad, even though he is old and it’s time to move on. My mom read that book to me on a car trip when I was 10, and she couldn’t get through the end she was sobbing so hard. I did the same thing as an adult when I read it to my husband. Buckets of tears. But now that reminds me of trying to read “Charlotte’s Web” to a group of first graders and not being able to read the part where Charlotte dies alone. Heartbreaking! Is it bad that these characters are both animals?
The characters I’d like to destroy are all the evil crazy killers in Stephen King’s books. I can’t read his stuff, but my husband does. King writes folks who deserve horrible, terrible deaths. Like by lazy house cat who would take days to wrap it up. Then eat their faces first while they were still kind of conscious. That’d do.

You have superpowers. What are they and what do you do with them?
I would want to be able to read people’s minds. Easy. I’m a very straightforward person, but most people are just big liars and fakes and it makes me crazy. If I could read their minds, I’d know where I really stood and if I should continue to have a conversation with them or walk away. Or lock them in a room with my cat for a week. (I feel the death by cat thing is taking over. I love cats. I really do. But I don’t underestimate them for one second.)

If I were to invite you over, what snacks would you bring, keeping in mind that fruit and dried fruit are not snacks?
I would bring some traditional Chex mix and some peanut M&Ms and lots of cans of Coke. There’d be some microwave popcorn in my purse, just in case, and another bag of M&Ms. You can never have enough of those.

If this question were any question in the world, what question would you want it to be and how would you answer it?
I’m a writer, so it would probably be about money. Something like “What would you do if you suddenly inherited five million dollars?” The answer is that there would be many wonderful donations and world-supporting stuff, but mainly you’d see my books in every magazine and I’d have a booth at every book expo in the world. Oprah would hold up a copy on one of her TV shows and tell my story because I would make a big donation to her school in Africa or something. And I’d buy my cats some really cool climbers and toys and stuff. They are the stars of most of my books, after all. 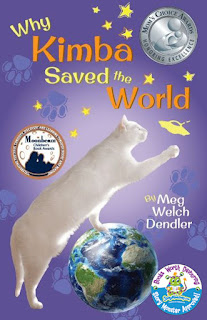 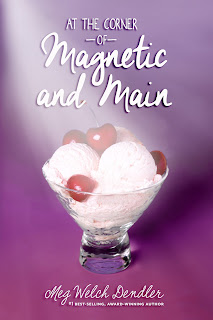 Books:
“At the Corner of Magnetic and Main”

"Why Kimba Saved The World" 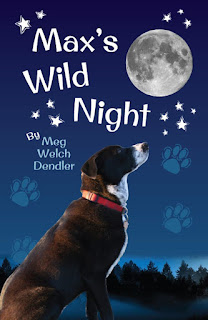