Lori B. Duff is a Humor Blogger and Columnist. She has released two books, “Mismatched Shoes & Upside Down Pizza” and “The Armadillo, the Pickaxe, & the Laundry Basket,” both of which are technically non-fiction, and available on most online retailers. (If you click the hyperlinks you’ll get to Amazon. Amazon had both books as the number one hot new releases in humor essays, allowing Lori to share screen time with Tina Fey and Amy Poehler and Chelsea Handler and Phyllis Diller and Joan Rivers and a host of other funny women – and this being perhaps the only time that anyone has ever called Lori ‘hot,’ and in public no less, for which Amazon will always live in a special warm place in Lori’s heart.) Her writing has been compared to that of Erma Bombeck and David Sedaris. A lawyer by day (writing is fun but not terribly profitable) she is married to her husband of 17 years, and has two teenaged children who are completely embarrassed by the stuff she writes, hence her Instagram screen name: embarrassingduffmom Because why pretend? Lori’s website can be found at http://loriduffwrites.com

What weather is my writing? A dark and stormy night? A Sunshiny Day? I’d have to say it is the kind of day where you don’t know how to dress, so you’d better dress in layers and keep a raincoat in the car, because it could be cold, it could be hot, it could be sunny or rainy. In other words, a Tuesday in Georgia where I live where, as the saying goes, if you don’t like the weather, wait fifteen minutes. Except in August. Then it is always eyeball meltingly hot.

My life is being made into a movie. Who plays me? Who plays my love interest? (or who plays my arch-enemy?) Who plays me is an easy one – Mayim Bialik, since I’ve been told ever since her Blossom days that I look just like her. Plus, she’s a real-life nerd, just like me. A friend of mine photoshopped my face into a picture of her (as Amy Farrah Fowler) and Sheldon, and I showed it to my kids. Even they couldn’t tell the difference. See for yourself: 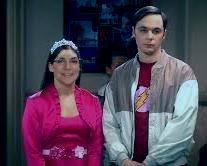 You can’t tell the difference, can you? But we look good in a tiara, no? As for my love interest, my husband looks like what would happen if John McEnroe and Bill Clinton had a love child. Some would say Richard Gere, so I’ll go for him because, well, wouldn’t you? My arch-enemy? I’d have to go with Kim Kardashian because it irritates me to no end that people with no talent or skills or work ethic get all the fame and fortune.

I receive a contract that allows me to have any pet I want (mythical or real) but in return I have to spend a week AS a pet to a mythical creature of my choice (dragon, giant, sphinx?) Do I take it or do I decline. I take it, of course, because think of all the blog posts I could get out of that adventure. The question is only implied as to which pet I’d want, and which mythical creature would take me as a pet, but I’ll answer it anyway: if I could have any pet I’d probably pick something mundane and Earthly like a cat because mythical creatures always seem sentient and I would feel odd owning something that could talk and/or was smarter or wiser than me. I’d kinda feel guilty owning a unicorn, for example. It would be like claiming to own the sunrise or rainbows. I’d be the pet of a Giant, because they’re like big people, in some fairy tales, and so would be less likely to accidentally roast me with a fire breath or claw me to death in some instinctual hunt.

Would I rather travel to the Past or the Future? The future, because of running water and climate controlled indoors and grocery stores. If I don’t shower every 24 hours, my hair becomes so greasy it looks actively wet, and I get noticeably stinky. I honestly don’t think I could stand myself for more than two days without being able to clean myself. I’d also like to feel comfortable drinking the water. Plus, I would be so afraid of saying something or doing something that would change the course of history if I were in the past. When I was a little girl, I used to spend large amounts of time imagining what would happen if Laura Ingalls Wilder could come visit me, and all the amazing things I’d show her. I didn’t ever imagine going to visit her, because man-o-man, her life seemed tough. I mean? Chamber pots or holes in the ground? No thank you. And having to act like women are the weaker sex and deferring to men all the time? I’d be burned at the stake as a witch within three days. Of course, all of this is assuming that it isn’t SO far in the future that the inevitable zombie apocalypse has occurred and brought us all back to the mess I was trying so hard to avoid.

Give myself a new look, as dramatic as I want. What is it? The middle-aged Jewish version of Serena Williams. Strong as all get out, confident, and beautiful. Plus, her ability to actually do something reasonably athletic without falling.


For the length of the day, you can replace all the world’s water with one substance of your choice (don’t worry. The sea life will adapt.). What do you choose? Lemon Jello. Because everything would look sunny and yellow, and it would be really fun to swim in, and it is fun to eat.

Sum up your life in five words and two punctuation marks. Hard work and happenstance: laughter.

Congratulations! I am now president of this blog post. What's your first executive order? It is a misdemeanor of a high and aggravated nature to speak to anyone else in a non-emergency situation prior to 9:00am and/or before the first cup of coffee has been finished. To do anything but read (and eat) at the breakfast table is considered rude and unforgivable.

If this question were any question in the world, what question would I want it to be and how would I answer it? Assuming there were truth in it, I’d want the question to be this, “Mrs. Duff, how does it feel to be the first humor writer to be given a Nobel Prize in Medicine?” And I’d answer it like this: “It feels fabulous. More specifically, I’m thrilled that everything from courtesy laughs to rip-roaring snortfests have now been recognized as actually being the best medicine. Because really, what feels better than a belly laugh shared with a good friend? And more to the point, the money will allow me to quit my day job. I wage war for a living as a lawyer. I’d rather write silly stories and make myself laugh.”