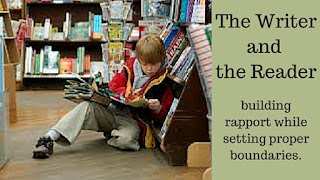 Part Four: What about reviews?

I'm going to add a point here, though: you can't let reviewers push you around.

Now reviewers don't mean to push you around. I've discussed before that a lot of reviewers don't expect writers to read their reviews at all. Especially if they don't generally read indie books. They're just giving their opinions on things they like and dislike within a book, which can be very subjective.

However, I know a ton of writers who say things like, "I got nailed on characterization in a review so I'm really doubling down on that in this book" or "A lot of readers complained the romantic element in the last book was too subtle. I need to make it bigger and bolder!"

And occasionally the reader/reviewer has made a good point and you can learn and improve.
Other times, they are just expressing a personal preference for a specific sort of writing ...
In the first post of this series, I told the story of my "confrontation" over characterization in The Force Awakens. In my opinion adding in a bunch of backstory for the mains would've taken that film in the wrong direction, but that viewer apparently wanted it.

And a writer can get a dozen positive reviews and still doubt themselves when that one negative one knocks down an aspect that didn't bother readers one through twelve at all. We somehow want to believe the negative review was more discerning, that they caught us pretending to be "good writers" when we somehow pulled the wool over the other readers' eyes.

It becomes especially awkward, though, if we know the reviewer on social media and interact with them regularly. We can get caught in the cycle of trying to please that particular reader to the detriment of the other readers who may very much like what we were doing and not want it to change.

So this is an odd balance, again, because you don't want to close your eyes and ears to potential flaws in your work, but at the same time you can't get pushed this way and that by the opinions of others.