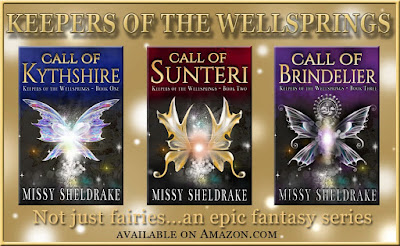 A selfish prince on trial for treason. A beloved princess hiding a talent for forbidden magic. The race between Dawn and Dusk to claim Brindelier, a hidden city in the clouds with a promise of ultimate control over the source of power in the Known Lands: The Wellsprings.

Azi and Rian are back! The newly-betrothed couple once again find themselves drawn into the plots of fairy-kind, bestowed with gifts of new titles and strange, powerful abilities. A threat is revealed; one which Flitt insists is worse than anything they have yet faced. Is she referring to the gathering of Sorcerers who call themselves the Circle of Spires, or is a darker, more sinister force at play? Tib knows. He’s seen the might of the Dusk firsthand.

The fates of Cerion, Kythshire, and all the Known Lands hang in the balance in the third installment of the Keepers of the Wellsprings series: Call of Brindelier. 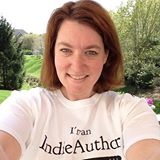 Missy Sheldrake is an author/illustrator who has been conjuring images of fairies in one form or another since she was very young. The wind in the trees and the rich scent of forest earth are her most treasured sources of inspiration, and on most mornings you will find her wandering the wooded paths, dreaming of the next adventure she hopes to put to the page.
Missy was born in Connecticut and attended Western Connecticut State University, where she earned a Bachelor of Science in Art with a concentration in painting and illustration. Even then, in her free time, she was writing. She moved to Northern Virginia several years ago and lives there now, on the outskirts of Washington D.C., with her true love and their son. She published her first novel, Call of Kythshire, in March of 2015 and intends to keep writing as long as the fairies allow it.

“What is it exactly,” I pause and think hard, making every word count, “you really need me to do in regards to this rare purpose, which is so important you’d whisk me here against my will in the midst of a battle that could very well mean the end of peace in my kingdom and possibly the deaths of people I’m sworn to protect?”
“Whoa,” her eyes go wide as I come to a stop right in front of her. “That was brilliant. Really brilliant. Excellent question. See, you just had to focus, that’s all.”
“Flitt.” I press my hand to my brow. My head is starting to ache from frustration.
“Don’t hate me. I can’t answer it,” she says with a cute little shrug and an impish smile.
“What?” I can’t help it. I lunge at her. She’s too fast, though. She pushes off from the grass and flies up out of my reach. “So help me!” I shout up at her. “You’d better stay up there, I swear!” I glare up at her and then realize her mistake in putting distance between us. Instantly I think of Rian. I start to feel the shimmer around me and then she dives into me, pinning me to the ground.
“Don’t,” she pleads as she straddles my chest. She’s surprisingly heavy for a fairy. “I was just playing. Don’t go. I can’t answer it, but I can show you something else.”
“Get,” I shove at her, “off!”
“Uh uh,” she shakes her head. “You have to promise to stay. It’s important, Azi. Really important. World changing important. Things are happening that never should happen. Bad things. Wicked things. Worse than Sorcerers. Worse than Jacek. Really bad.” She leans over me with her hands on my shoulders and her rainbow-colored ponytails spill forward, tickling my face. “Really, really bad. Please. Do you promise?”
“Worse than Jacek?” I look up at her.
“You can’t answer a question with a—” she stops herself at my death glare. “Worse than Jacek,” she whispers. Her eyes sparkle with tears and change from blue to red to silver. This close I can see she has no pupils, just orbs of ever-changing light that shimmers softly and unpredictably. I’ve never seen them so clearly, never been so drawn to them.
“I promise,” I say, tempted by the familiar tingle of magic rising inside me. I want to see what she’s seen; I want to know what’s in a fairy’s mind.