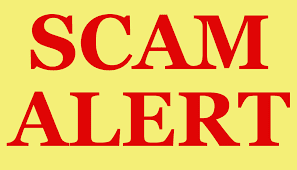 My general worldview is I'd rather be cheated a few times for small amounts than treat everyone with suspicion, but if I KNOW for a fact someone is trying to scam me, I'm going to let the world know about it so they don't do it to others. However, this week I had a red flag interaction.
I'm posting about it because the indie writing community is pretty small and we depend a lot on the kindness of reviewers. That said, some people like to take advantage of authors, and it's best to be informed about potential scams.
This started about a month ago ... I received an email asking me if I'd be willing to give a copy of a book in return for a review. I do this all the time, but this person insisted on a hard copy (not my preference, but I do budget for a certain amount of them in my promotion budget) rather than an ebook. I'd just released a new book and had a few to spare, so I did send the book. I then kind of filed it in the back of my head ...
Today the reviewer sends me an email saying that she's unable to keep up with review demands (then maybe she shouldn't be emailing people requesting copies?) and is starting to charge for reviews ... she's not charging a lot, she says, not as much as Kirkus, only 60 (I don't know how to make the English Pound's sign on this keyboard).
So if Jodie Cook of https://forthenovellovers.wordpress.com/ contacts you asking you for a copy of your book, be warned, she will follow it up with a request for money, but too late for you to cancel the shipping of the book. Please spread the word among the writing community.

It only ended up costing me a paperback ($8 including shipping, roughly), but in their interactions, the person did suggest that I could send them multiple books, which could've ended up costing quite if I'd gone for it.
I chose not to confront this individual because of the potential of a trolling backlash, but at the same time, if she tried to get money out of me (and did get a paperback with potential resell value), she's probably doing this to others. If others are sending her multiple books and she's able to sell them online, she could easily be making a profit and then being able to back out of review commitments because they "didn't pay her" (As I've discussed elsewhere NEVER pay for reviews. That will bite you in the butt).

ETA: Someone asked me how I'm sure this is a scam because while inappropriate to request funds from an author for a review, it's not necessarily criminal.
My reason for believing this to be premeditated is the timeline.
The original contact email was July 25th and we went back and forth for a day or two about whether she'd accept an ebook copy rather than a paperback.
The request for money was tonight (August 11th), so a little over two weeks (in my original post I said "about a month" but I went and checked dates and these are the exact dates). In the request she claimed, that she's been dealing with a backlog of books for over four months and her reasons for switching to paid reviews were (quoting now), "I would like you all to note that this is a final resort for me and I have been trying to power through the backlog of books for months but it has got to the point where it is impacting on my health and this is the only avenue I can take where I can still review."
If she had been dealing with a backlog for "months" to the point where it was becoming a physical burden, then why would she solicit a review copy from an author less than three weeks prior?
Even if she hadn't premeditated it, it's just deceptive to request an item (that cost money to ship) based on one condition then add a price for the service after the fact. Either way, I'm not asking people to troll or punish this individual. I'm just saying, "Do not do business with her."