Strange lights on the horizon. A buzzing noise. A spaceship descends. Is it visitors from another world? No, it's Lesa McKee!!!

Lesa McKee grew up at her Grandmother's knee, listening to the French folk-tales her animated Grandma Ida shared. A love of stories was born and her imagination took off!
She’s now living her dream as a Christian Indie writer of feel-good fiction, including a short story series of far-out space cats, titled 'Operation Space Cats'. These purrific feline adventures are filled with faith, friendship & fun! 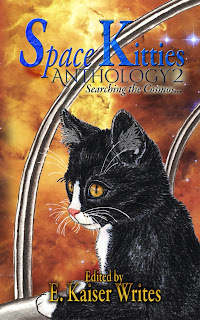 We sometimes hear stories about lottery winners who still choose to man their tollbooths or drive their buses in spite of being able to afford to quit. What job (or jobs), to you, would be worth working even if you didn't need the financial pay?


Having money won’t curb my imagination, so yeah, I’d still be escaping to other worlds through my writing. I love anything creative, be it writing, drawing, designing (anything and everything), flower & container gardening, so anything I’m passionate about. And I wanted to be everything when I grew up! Still do.:)

Be it a singer, nurse, beautician, interior designer, travel agent, and the list goes on. I  love to bake so it would be fun to run a cupcake shop and do something really creative with the menu and the decorations, of course.

You know I must go out and open an Indie books and cupcake shop now. I’ll spend the night dreaming up names for it.

What method do you suggest for dealing with dragons?

I’d try the diplomatic approach, but if that failed I have a team of space cats at my disposal with invisible spaceships, hover boards, and a ‘secret weapon’ so I have plenty of back up if I need it. And because, you know, cats.

Can you simply walk into Mordor?

Mordor. Tell me that’s from Lord of the Rings or one of those other Tolkien books/movies. I’m going to have to google it because

Nightmare first. I’ll save the best for last.:) My worst nightmare is recurring unfortunately. I’m sleeping along, having a regular dream (I could be having fun) until a tornado pops out of nowhere. All of a sudden *fun’s over* it’s a tornado dream. I usually have these 3-4 times a year. I almost always end up in a car trying to outrun it.

And now for the best. Happened just this past February. I know because I wrote it down which I never do. (And I’m so glad you asked because I never thought I’d get to share it:))

My dad (Allen) passed away two years ago. He had an identical  twin brother (my Uncle Alvin), and they passed away three months apart. They were 91, and shared the same nickname, Al! They had an amazing bond. I had to set it up, so here’s the dream. (By the way this dream had a part two, all in the same night.)

TWO DREAMS OF MY DAD

My husband and I were in his work shed and we heard a helicopter flying over us. We stepped outside. It was red & grey, and I thought it had a chevy or ford logo on it.

The helicopter turned around at the edge of our house, and came back toward us. It was so close, and I saw my Uncle Alvin was flying the helicopter. (No, he wasn’t a pilot in real life, lol.) He had a huge smile on his face!

Then my dad popped his head up from the seat next to Alvin and had a big smile as well. I was thrilled to see him!

They flew over us and lowered the copter over our back alley. My Dad (somehow) rolled down the window and said, “Hey! You coming up there with us?”

I instantly knew he was talking about Minnesota (where my uncle was from), and he meant for the weekend. I kind of shook my head yes, and said I’d go (even with my fear of heights. Yikes!)

Uncle Alvin parked the copter in the back yard. At that point, I noticed David was gone, but my grand-darling, Alana was standing next to me. (It’s so typical in my dreams for me to be with one person and the next time I look at them it’s someone else!)  I brought her in the house and started looking for David to see if he wanted to go.

I found my dad inside in the back room packing his brown suitcase (the same one from ‘real life’ he used for years). I don’t remember finding David, or talking to my dad (I wish I would have!), but Alana had fallen asleep in one of the other bedroom’s.

I was so scared of the copter ride,  but I was going to go anyway.

I was so excited about this dream and seeing my dad, I laid there and thought about it for a while, and then I fell back asleep and had a second dream …

In this dream my mom came over. She looked younger too. Probably 50’s or so. I was so excited about my ‘dream’ I started telling her that I saw my dad in a dream. We were standing in the back yard.

At that point, my dad walked right by us and went into the house. He again looked young. I was so excited telling mom the dream that I didn’t even say anything to him!:(

After I told her, I went into the house to find him. He was asleep in his recliner. So I sat next to him, content to watch him sleep. He opened his eyes a couple of times, and looked at me. The tv was on but I didn’t pay any attention to it.

Then I woke up feeling so good about ‘spending time’ with my dad! Of course I cried like a baby afterward because I miss him so, but it was a lovely treasure I’ll always cherish. After not seeing him in real life for so long I felt it was a gift. Still makes me tear up and smile at the same time when I think about it. Two dreams of him in one night.:)

When cats take over the world, how do you plan to win their good graces?

Well, as I mentioned above I have feline friends in high places.:) But I could do with learning more of their language. (I don’t speak cat as well as I should).

If you could live inside a theme park ride, which would it be?

Aack! As a person who can’t even WATCH the rides in motion without getting nauseous, this one is a toughie. Is there a fairy tale ride with Cinderella’s castle that doesn’t include a boat trip or anything spinning? Again, losing my cool vibes here ...

Are you the sort who sticks with the bird in hand? Or goes for what's behind door number two?

It depends on how colorful the birdie is.:) If I love it (say it’s yellow with green feathers which equals a new car) I may just keep it and forego the risk, but if it’s a meh color (let’s say it’s orange and equals a sailboat, which I’ll never realistically use) then, ya. I’m gonna go for door two!

What is the best part about writing?

Aside from the immediate benefit *the thrill* of spending time with my characters in an imaginary world I created, I’d say it’s the long-term benefit of knowing one day my grand-darlings will be reading my stories, and passing them on through the generations. Leaving behind a legacy like that is truly the best part of all!:) 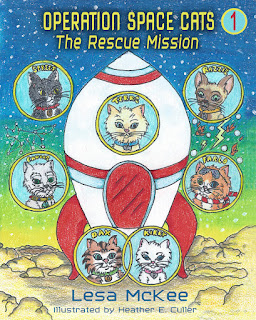 Connect With Lesa around the Web!!!