Author Biography
Don’t believe all the hype: Sarah Ashwood isn’t really a gladiator, a queen, a cowgirl, a Highlander, an expert fencer, a skilled horsewoman, an archer, a magic wielder, or a martial arts expert. That’s only in her mind. In real life, Sarah is a genuine Okie from Muskogee, who grew up in the wooded hills outside the oldest town in Oklahoma. She is author of the Sunset Lands Beyond Trilogy. In real life, she lives (mostly) quietly at home with her husband and three sons, where she tries to sneak in a daily workout or run to save her sanity.

I know exercise is good for me, but it is not entertaining. What methods do you suggest for making workouts more fun?
You just haven’t found the right form of exercise! Try wearing boots and a cape (in a pinch a towel will do) while running around the house with your arms outstretched yelling, “Hey, Mom, look at me, I’m flying!” and follow it up with jumping on and off the furniture. Seems to work for my kids. They’re pretty fit, and they stay entertained.
Most RPGs have three basic classes: healers, who heal; tanks, who protect other party members from damage; and dps who damage the bad guys. Which are you? Points if you’ve actually played an RPG and can tell me about your in game character.
Oh, I’m an absolute expert at RPGs! (I’ve never played an RPG in my life.) My character is a tank, who uses her “muscles of magnitude” (I totally stole that line from Spaceman Spiff in Calvin and Hobbes) to deflect any fireballs thrown at my teammates. I mean, the fireballs just bounce off my character’s muscles and slam right back into the person who threw them. Yeah. Don’t mess with me.

Which bear is best?
Polar bears, because they’ll swim in freezing seas under a big chunk of floating ice and keep tipping the ice until the seal falls off. Viola! Fresh meat!
Or was that killer whales? Hmmm…either way, it’s a clever trick.

How much wood would a woodchuck chuck if a woodchuck could chuck wood?
Depends. Does he have to split and stack it too? That’ll slow you down, from 5 ricks to 3.
If you favorite historical era had an ice cream flavor made in its honor, what would it taste like?
Ancient Rome, and grape. Because everyone knows the Romans really liked grapes.

Who wrote the book of love?
Some might say Shakespeare. Some might answer Don Juan. Some might claim King Solomon. But I’m going to go with Henry VIII. Sure, he had to lop off a few heads to find that one special lady, but the point is he never gave up. He never quit trying. He must’ve known something about love. And surely transcribed it at some point.
You have to trade places with one of your characters for a day. Which and why?
Lord Ilgard, the Simathe High-Chief. Because I’m a very animated person, and I think it would be interesting to be in the company of the world’s greatest stoics.

You have superpowers. What are they and what do you do with them?
Easy, flying. I would fly across the Grand Canyon, soar over the giant redwoods, tour ancient Rome by air, travel the length of the Great Wall of China, and alight on the Pyramids. Basically, I’d use them to visit all of my favorite places I’ve been and go see all of the places I want most to see.

If this question were any question in the world, what question would you want it to be and how would you answer it?
I would want it to ask what foods I craved during pregnancy. And the answer would be hot dogs. With all three pregnancies at some point I craved hot dogs. And my greatest feat during a crave session was eating two Costco hot dogs, buns and all, in one setting. That’s gotta be a superpower, right? 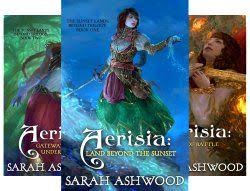 You can find Sarah on her Sarah Ashwood Facebook author page, friend her on her Sarah Ashwood Goodreads page, follow her on Twitter @1sarahashwood, or on Instagram where she goes by@runnerwritermom. If you want to see lots of pins related to fairytales, fantasy, magic, castles, reading, and writing (and occasionally fitness and running), you can follow her on her Pinterest page, as well.
Labels: author books fantasy humor random reading writer writing