What to do with Reviews ... 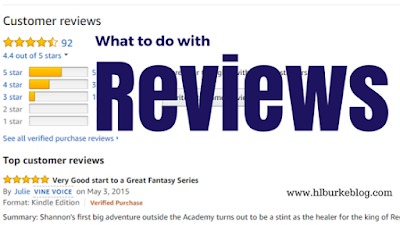 Yep, here I go again, writing about reviews, but it keeps coming up in my author groups, and it's either post long Facebook rants or put it in a blog (and trust me, they're tired of me on Facebook).

After all, it's hard to know, as a writer, what to do about reviews. We're often told how important they are, that we need them to sell books, that we have to actively pursue them ... but then we get them and what should we do next? We generally know the big "no nos" (Don't reply to reviews. Don't try and contact the reviewer. Don't track down the reviewer and hit them in the head with a wine bottle ...), but what can we do about reviews?

Well, there are a lot of options, and it's going to depend on your goals and (maybe more importantly) temperament.

So here's a short list of the various things you can do with reviews:

If you are a sensitive personality who is easily derailed or discouraged by criticism, you should probably not be reading reviews.
If pride is an issue for you and/or you are addicted to the affirmation of others, you should probably not be reading reviews.
Chances are, you put the book up when it was what you wanted it to be. Will a review really make you take it down and change it (if you published with a publisher rather than self-published, this might not even be an option)? If not, what do you hope to gain from reading reviews? If there is nothing to gain and you find it negatively impacts your life to read the criticism, you're probably better off just being hands off.

2. Use them to tighten your marketing.

It can be hard to find the right readers, and continually reaching the wrong readers can screw up your long term marketing. If you note a pattern in reviews that suggests you are not meeting reader expectations in some way, this could be a sign that you are targeting the wrong readers.
Perhaps your cover art doesn't reflect the genre or tone of the book well. Perhaps your blurb isn't specific enough. Perhaps your keywords are drawing in people outside your intended audience.
If most complaints about the book seem to be less about the book itself and more about the reader's expectations, see if you can redirect your marketing to find a more appropriate reader pool.

This is the hardest, in my opinion, to apply well. On one hand, it is important not to let your artistic vision get watered down in an attempt to please everybody. On the other, if a review brings up a valid complaint (the most obvious being poor proofreading or continuity errors. Something that is more a matter of fact than opinion), you may wish to address this. Also, if you are unable to get your book off the ground as far as sales go, it may be because the book isn't quite there yet in terms of quality. Maybe you rushed to publication. Maybe it needed another round of editing. Maybe your first chapter isn't as "hooky" as you thought it was.
This is more a problem for self-publishers. As mentioned above, if you went with a publisher, you probably do not have a say in whether the book gets taken down for another round of edits, but you at least have the assurance that your publisher felt the book was marketable, which leads into  the fourth thing you might want to get out of reviews.

As mentioned above, if you went with a traditional publisher, someone other than you said, "Yes, I can sell this book. I will put my time and money into this book because I believe in it."
A self-published author has the amazing (but terrifying) freedom of being the final word on whether their book is "ready" or not, on whether it is marketable, on whether it is worthy.
And as someone who has multiple self-published books as well as one with Uncommon Universes Press, I like both ways. If I wasn't confident in my stories, I wouldn't publish them, but I get that not everyone has that "buoyant overconfidence" ... and even me, I go through stages of really being desperate for some sort of affirmation that I'm doing this right.
To an extent reviews can provide some of this assurance. The first book I self-published, I totally expected only family and friends to purchase. It was getting a review from a stranger who liked it that made me think, "Maybe I can do this professionally."
On the other hand, negative reviews can stop this forward momentum, so I would resist going there to comfort yourself too often. Most authors I know can get ten positive reviews and then totally be floored by the eleventh review being negative. All the positive vibes of the ten are somehow consumed by the negative black hole of the one ...
Even with positive reviews, it's easy to fuss over "what exactly did they mean by that?" or the qualifiers people put into things. I remember getting a four star that said something to the effect of, "Good story. Writing is nothing special, though."
Which half of that do you think stayed with me for the longest?

This is kind of a "proceed with caution" one because you don't want to do it in a public venue. No author wants to get the reputation of being someone who mocks/tears down their critics. It's petty. However, sometimes reviewers get caught up on the weirdest things. Sometimes you'll read a review and just go, "How in the world did you come away with that impression?" Sometimes they'll criticize you for having typos in your book in a review littered with grammatical errors. Sometimes all you can do is laugh (discreetly.).

There is some debate about who actually "owns" reviews, but the general consensus is that small quotes from reviews fall under fair use and can be used in marketing materials as long as they are not quoted in a way that misrepresents the original intent of the reviewer (so no taking "Not the best book I've read" and quoting it as "...the best book I've read."). However, grabbing a "snippet" to use in an advertising quote is definitely acceptable. It can also come across as more genuine than "This is a good book. Signed, the Author/the Author's Mom."


So how do you handle reviews? Is it easier for you just to be hands off and avoid them altogether? Have you learned anything from a review?