Author Blurb
Savannah Jezowski lives in a drafty farmhouse in Amish country with her Knight in Shining Armor, her little warrior princess and a loyal brigade of dogs and kitties. She is the author of When Ravens Fall and is also a featured author in Five Enchanted Roses from Rooglewood Press. Her work has been published in Ray Gun Revival, Mindflights and in the student publication of Fountains at Pensacola Christian College. She likes books, faeries, writing hats and having tea with her imaginary friends. 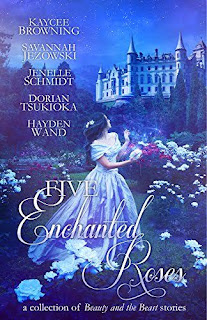 Sum up your life in five words and two punctuation marks.
This one is easy: FAMILY!
Pirates, Ninjas, or Vikings? Choose carefully.
Vikings all the way. I would have chosen pirates once upon a time, but after writing my last novella (yes, it was about Vikings) I have to say I have a fondness for the rugged and ornery Northmen. Have you ever read Nordic poetry? Some of it is actually pretty cool, and they're legends are over-the-top-awesome. Did you know there is a gossiping squirrel called Ratatoskr who runs up and down the great tree causing mischief between the bird at the top and the serpent at the base? He inspired Tosk, the comedic and painfully chatty squirrel in my book When Ravens Fall. And that’s only one of many legends that wormed their way into my short novella. So many unique stories one can draw inspiration from. And their outfits are cool.
Are computers friends or foes?
Aren't they both? They really can be useful--my brain moves too quickly for me to write a novel longhand, but the relationship between Operator and Computer is pretty dicey. I mean, I'm not sure I would even classify it as a relationship. More like mortal combat. It's like grabbing a dragon by the tail and saying "Hi, there! We're friends, right? Yes? Maybe? Oh, you want to eat me now. Okay. I'm good with that. When you're all done with your snack, can we finish my novel?"
If you had the honor of naming something really big (a country, a spaceship, a planet) what would you want it to be and what would you name it?
I would totally name an airship. I've always wants to write a steampunk novel about an airship called the Persephone. It just sounds like an awesome name for an airship.
If you favorite historical era had an ice cream flavor made in its honor, what would it taste like?
You mean I have to pick one favorite era? because they're all pretty neat. For example, the civil war era they wore those awesome dresses, and the Victorian era were so refined and turn of the century. Then there's the Vikings, or the age of Chivalry...I guess if I had to choose, I would choose the era of Downton Abbey. I love the elegance and the love with tradition, but also the excitement of change and rising technology. What would it taste like? Orange and lemon sherbert--mixed. A traditional flavor that's been around a long time and another one that packs a nice punch.
Did you bring me anything?
Um...my daughter is blowing kisses? Does that count? Before you decide, you should know she’s six months old so her kisses are mostly, uh, spit.

Vs movies seem to be all the rage. If you had to put one together, what on screen match up would you like to see?
Wolverine vs. the Thundercats because the Thundercats are that amazing. You do know who the Thundercats are, right?
What film era do you feel best represents your day to day life?
My life is pretty quiet, all things considered. I'm not sure what film era would fit that best...but I love BBC movies based off classic novelists like Dickens, Gaskell and Austen. I watch films like Pride and Prejudice, Little Dorrit, Cranford…ooh, my all time favorite is North and South based off the book by British author Elizabeth Gaskell. It’s about the tensions between a girl from the idyllic southern portion of England and Mr. Thornton, the brooding factory owner of the cold, materialistic north. But what that has to do with my, uh, everyday life is anyone’s guess. My husband works in a factory. And I live in the country. So there. I guess it fits just fine.

If this question were any question in the world, what question would you want it to be and how would you answer it?
I’m rather introverted and get nervous when people ask me questions, especially personal questions that require me to bare my soul and share my most appalling secrets…so, I guess the safest question would be: What is your name? To which I would answer, “Savannah,” because even on my worst day I know the answer to that question.