Why I don't write Christian Fiction 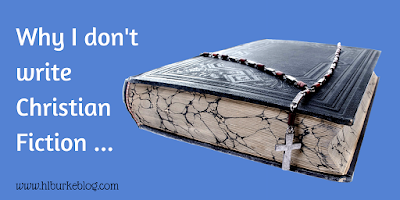 To start off some disclaimers/caveats/softeners:


1. I don't think that the reasons I list below reflect the viewpoint of all Christian readers. It's more an issue of what publishers within this genre (for better or worse, "Christian" is a genre of fiction now) have trained people to expect.
2. Just because I draw certain lines in different places than other people doesn't mean I am better/stronger/more mature than them. What people are comfortable with can be very personal and stem from a lot of different reasons. It's not my business to analyze your personal choices.

So this is more an explanation of why I intentionally do not label my works Christian Fantasy and sometimes go out of my way to avoid marketing them as such.

While I've never hid the fact that I am a Christian and I'm even a member of various Christian writers' groups, I don't consider what I write to be Christian fiction and I intentionally have avoided that label. There are a lot of reasons why, but most of them come down to reader expectations that I don't meet.

Sometimes my books will have a message/moral/theme, but it usually comes out of the story rather than the other way around. There is an expectation that Christian fiction will teach you something or in some way illuminate your life. I tend to write story first and then if anything blossoms out of that with a deeper meaning, that's nice, but I don't like to plan my stories around a message and question how different plot points further the moral I'm trying to get across.


2. There are some sticky points to including religion in made up worlds.

If you are writing fantasy in what is clearly our world, this is less of an issue, but the majority of my worlds aren't our world, and how religion is addressed in those worlds depends on the part I want it to play in the story ... and then you get into the "if you make up a religion in a book, some idiot somewhere is going to start practicing it" issue (for example, Jedi knights), so your options are either to really not touch on religion in much detail or to make it a blow by blow retelling of Christianity, just with the names changed (which works for Narnia with Aslan, but doesn't lead to much creative world building.). A lot of times authors get tied up writing a religion that fits both their made up world and story but is still theologically consistent with Christianity, and it often leads to weird plot gaps and contradictions.

It's a controversy of a mild nature, but I do. It would be worth its own blog post about why I don't mind certain words and why I don't feel morally convicted to not say certain words, but the crux of it is I find which words are considered "dirty" and which aren't is more an issue of "culture" than "conscience." I also don't feel my characters committing a sin means that I have committed it. I intentionally keep it mild and infrequent, but most Christian audiences will hit you hard in the reviews if you slip in a single "Go to Hell." I don't want to advertise that my book meets these 'squeaky clean' expectation when it clearly doesn't.

Honestly, this is ALSO worth its own blog post, but I have been burned out for a long time about the "hands off" approach Christian culture has taken to sex. I don't personally like to show explicit encounters in my work. I do like my (main at least) characters to follow a certain level of sexual morality/purity, but I write married couples all the time, and even with engaged/in love couples, I like to show that sexual attraction isn't an evil people must struggle against at every turn but a gift that's part of the foundation of a romantic relationship/eventual marriage. A lot of Christian authors want you to deal with sex as if it is a big mystical secret or an unpleasant side-effect to the more "wholesome" aspects to romance.
The Christian market, as a whole, doesn't allow for this. Even detailed descriptions of kissing are looked down upon by some Christian readers. I'm not interested in writing prim and proper couples who are scandalized by holding hands on a date.

I have a good understanding of my faith. I've read apologetics, but a lot of times I've run up against big theological questions that I don't have an answer for, and that, for me, is where faith kicks in. Even the spiritual authorities disagree on a lot of points, and if it isn't a salvation issue, often times I'm fine admitting I don't know and I'll leave that up to God. I don't need every answer in my life.

When you create a world that isn't "our" world, a lot of times you create even more theological quandaries ... how does the Christian God fit into a world with other powers? Are all powers in this world necessarily either from God or the Devil? Do I even want my world to have an identical spiritual path to our world? Does there have to be a Christ character in my world's lore or else my work is false and heretical?

If you write Christian fiction, Christian readers want the answers. If you just write fiction, you don't necessarily have to have your world be theologically sound. It can just be made up. I don't know why I can make up totally improbable animals in fantasy and it is just "make believe" but if my theological reasoning doesn't hold to exact Biblical analogue that's bad. I can bend laws of science to my whim as the creator of this invented world ... don't you dare even indirectly challenge theological cannon.

I don't want to misrepresent God. I don't want to put forth alternate morality, but I'm okay with my created universes being imperfect. It's like those people who mathematically analyze fictional universes. Yeah, believe it or not, the math is sometimes wrong in made up worlds because the dang worlds are just that: MADE UP.

In some ways, due to the issue I raised in item 2, I prefer my made up religions/theological systems to be imperfect because I don't want them to be held up as a replacement for the truth. They aren't. They're just fiction, meant to supplement a world written purely for entertainment.

So those are my reasons.
Now, there is some good Christian fiction that violates the above reasons, but if you are violating all five on a regular basis, chances are you're going to anger your audience. It's easier for me to control expectations if I don't label my writing as Christian fiction.

What about you? Do you read Christian fantasy? Do you expect it to follow certain rules?