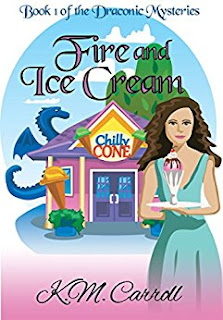 Tianna Tokala is starting a new life in Carefree, Arizona, working in an ice cream parlor. She also has the magical ability to turn into a small dragon called a drake. All she wants is a quiet life where she can make ice cream with her wonderful ice breath.

But when her manager is found dead with a bowl of Tianna's Rocky Road ice cream beside her, Tianna springs into action. With a knack for observation and her enhanced drake hearing, she delves into her manager's smoky draconic past.

Aided by a secretive drake, a single mother, and a four-year-old dragon shifter, Tianna must unravel the web of lies that surround this dragonic death ... or there may be more fire than ice cream.

I had sort of given up on cozy mysteries because I find they are usually very light on the mystery. A lot of times they are solved almost by coincidence and the characters spend more time worried about recipes or shoes or flirting with love interests than actually solving anything. I'm not sure if this is the norm, or if I just picked out a bad batch to start with, but after three that fit this pattern of "MC goes on dates and eats food then at the end is handed the answer without doing any legitimate crime solving," I decided the genre wasn't for me.
However, I did have faith in both K. M. Carroll as a writer (due to her YA Paranormal series which I enjoy), and I'm a real sucker for anything dragon, so I had to try this.
I wasn't disappointed. This is a sweet, satisfying dish of murder and moderate mayhem with a character who actually looks for clues ... and yeah, she also eats food and makes ice cream (doesn't really go on dates, but that's probably coming). Definitely worth the read if you like a gentle mystery with some fantastic elements.
The only thing that struck me as a little odd was the fact that everyone in this very familiar world is okay with their being dragons. I'm used to the magical beings hiding so the average person doesn't know they exist (though in fairness, if your magical being is as big as a dragon, hiding would be pretty dang hard), so it was kind of a surprise when the dragons and drakes were just out and proud ... yet the world was basically ours. I'd think having actual dragons would change history enough that the world would be slightly different (how does warfare go down in a world with dragons? Do dragon/drake issues affect politics? Are dragons all rich and powerful because humans are afraid of them or have humans just adapted?) That actually could all be explored/touched on in later books (and would probably be out of place in this genre), but it did make me want to read THAT book later.