Review: The Tomb of the Sea Witch 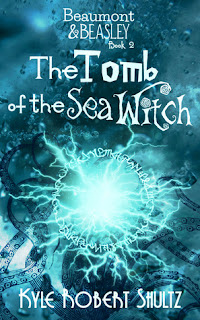 The Tomb of the Sea Witch
by Kyle Robert Shultz


Private detective Nick Beasley used to be a debunker of magic--and a human being. Then he found out magic is real. The hard way. Now he's on the run from a powerful council of enchanters who want him dead, along with his little brother Crispin and the renegade enchantress Lady Cordelia Beaumont.

So when Cordelia suggests going undercover at a stronghold of the Council's power--the Warrengate Academy of Advanced Magic--Nick isn't exactly thrilled with the idea. Cordelia insists that the school may hold the key to Nick regaining his humanity: an ancient spell created by the Sea Witch from the tale of the Little Mermaid.

But the mission proves to be more complicated than Beaumont and Beasley had expected. An ancient threat is rising from the deep, bringing an army of the dead along with it. Shocking revelations send Nick, Cordelia, and Crispin on a harrowing journey under the sea.

The Sea Witch is not quite as dead as everyone believes...and her secrets will change everything.

Perfect for fans of Doctor Who, Once Upon A Time, Indiana Jones, or The Dresden Files, the Beaumont and Beasley series features high adventure in a world where fairy tales are history.

I'm really torn on whether I liked this one more or less or the same as the first book in the series.


Things that the other one did slightly better:

Tighter plot. This one felt as if it took a while longer to get going. Once it did get going it was really good.

This one is more intent on setting up sequels which is not really a negative, but it does leave one looking forward to future adventures more than absorbing the ones to come.

There was one point where a character had a moment of telling the other characters things about themselves that they didn't know which seemed a little less sophisticated than the rest of the story telling.


Things that I liked more or less the same:

Relationships between the characters which are realistic and lack frustrations of people being mean/petty to each other just for the sake of that--while still being reasonably good at pushing each other's buttons.

The humor is still awesome.

So ... probably the same star rating, but this book does feel like it is moving you between events setting up something bigger.


Definitely worth the read, though, and a lot of fun.