Review: The Stroke of Eleven 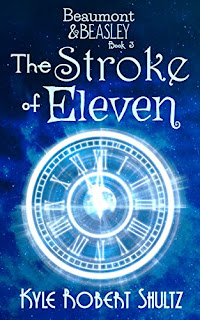 The Stroke of Eleven

The adventures of Beaumont and Beasley are at an end.


The Council of Scions has finally caught up with Nick Beasley and his friends–and the sinister enchantress Madame Levesque has plans for them. Nick and Cordelia must solve an ancient mystery for her. Otherwise, Crispin and Molly will be lost forever.


The investigation leads Nick and Cordelia to the Castle of Basile, a bizarre place detached from space and time. Old friends are trapped there, and Nick and Cordelia are soon imprisoned along with them. Their jailer is the Fairy Godmother from the tale of Cinderella…who turns out to be far less benevolent than the storybook version.


A masked man offers to help–but can the White Rabbit really be trusted? What is Cinderella’s dark secret? And what will happen when the clock strikes twelve?

My extremely coherent and helpful review

I tried to post this on Amazon, but the rejected it because it apparently lacked coherent information, so I'll try to do better here.


I loved the first two books in this series. They both made my top 10 list for 2017. This one, I found, took a little longer to get into. There wasn't as much snark. There was a little bit, but the tone was a little quieter, a little slower, a little less joke a minute and more joke every couple of pages. Also, it was a time travel story, made clear from the get go, and time travel stories have that annoying habit of "erasing" all the consequences at the end therefore making me a little less invested in the sakes. It was about the 50% mark where things that I can't get into because of spoilers gave this the highest stake level of any of the book so far and dang ... from that point on, it is mad feelz.


There's a really sweet moment we've been waiting for three books for ... then a really bittersweet ending ... and things just get more complicated.

Anyway, so it became my favorite of the series so far from about the 50% mark on and I highly recommend it.

You should probably start with book one (linked below), then read book two. (these are affiliate links. You've been told) then three ... there are some shorts in there somewhere to, but you don't need to read them to understand the plot.