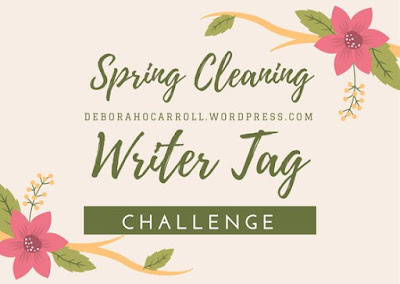 I was tagged by K. M. Carroll in the Spring Cleaning Writer Tag Challenge. I almost never remember to do these things, but then I realized I've totally run out of blog content (I've been kind of busy as you can hear about here) ....

1. Dust-bunnies and Plot-bunnies: Reorganize Your Writing Goals (Or Make New Ones)

Neither. I don't do goals.That takes planning. Why plan when you can do?
I do bursts of excitement that I sprint to the end with and then look up and see what remains when the dust clears. I'm trying to keep up momentum on my current project while simultaneously hitting any small projects that jump up like it's Weasel Stomping Day.

2. Which Stage Are You At? Expound!


a. Remodeling layouts (planning the story)
b. Painting the walls in colorful hues (writing)
c. Polishing the windows and scrubbing the floors and putting flowers in vases (editing)
d. Blueprints (not to the cleaning or remodeling yet… just drawing up plans for the very beginning inklings of a story)
e. Some combination of those things (cleaning out a closet)

I guess B. I don't really do spring cleaning (my approach to cleaning in general is "how much can I avoid doing?") so all of the options sound really really miserable to me, and writing makes me happy, not miserable so I'm having a hard time computing. But I am doing my first draft of the second book in the Green Princess trilogy.


3. Treasure From the Back of the Closet (Share one to three snippets you love!)


“I’m assuming it wasn’t Uncle Eamon who sent that letter after all.” Bryce crossed his arms.
Langstyn sniffed. “Oh, don’t act so surprised, Bryce.” He settled into one of the armchairs and sat with one ankle resting on the opposite knee. “You’re nothing if not predictable. I knew if I sent that letter, you’d hurry to my father’s side which meant you’d arrive within a certain window. All it took was asking the guards at the palace gate to look out for your arrival and inform me of it in order for me to have this stage set, so to speak.”
“I suppose.” Bryce sank into the opposite chair. As little as he wanted to interact with Langstyn, he had to admit, he was curious about where this was going. “So, you’re impersonating your father now?”
“Would you have come if you’d known it was me?” Langstyn arched his eyebrows.
“No,” Bryce said.
“That’s what I thought.” Langstyn leaned forward and poured himself a glass of liquor. “You want some?”
“No thanks.” Bryce crossed his arms.
“Oh, come now, cousin. I know you’re supposedly the ‘virtuous’ one, but you aren’t against a little drinking, are you?”
“No, I drink, but only with friends. Seriously, Langstyn, with everything that happened between us two years ago, do you really expect me to sit here and listen to you prate on for long? Get to the point.”
Langstyn sighed. “Yes, well, I need your help with something.”
Bryce laughed.
Langstyn’s scowl deepened. “Is that funny to you?”
“Oh, yes, very.” Bryce shook his head. “After what you put me through. After what you put Kit through, do you really think I have any interest in helping you with anything?”
The prince rolled his eyes, “You haven’t forgotten that flora magi harpy yet? She must’ve been quite the bedmate.”
Rage heated Bryce’s chest, and he burst to his feet, pushing the chair back in his haste. He was halfway to the door when Langstyn caught his arm.
“Come on, cousin! Hear me out. I’m not coming empty handed.”
Bryce shook his cousin’s hand off and rounded on him. “I can’t imagine a thing in this world that would convince me to cooperate with you.”
“You forget I’m your future king.” Langstyn’s eyes glinted. “Yes, you may hate me, but when my father dies, when the throne is mine, do you really want to be my enemy? You like being a Keeper? One word from me and that ends.”
Bryce swallowed. His decision to join the Keeper forces had given him purpose after his separation from his beloved Kitrin. At first it was simply a matter of distraction, something to focus on to drown out the heartache, but in the last year or so, he’d become quite good at soldiering. He’d climbed in the ranks, learned out how lead men, gained the respect of those above and below him, and for once in his life, he felt his actions made a difference. It might not be flashy work or greatly lauded, but tracking down the bandits and highwaymen who plagued honest citizens, keeping the roads and borders of Embryn safe, it was all he had.
The unfortunate truth of the matter, however, was the life as a Keeper made Langstyn his future employer.
He sighed and shut his eyes. “What do you want, Langstyn?”
With a smug smile, Langstyn returned to his chair and took up his glass again. “I’ve arranged a marriage for you.”


Bryce coughed. “You what?”

3.5. Bonus: Do Some Actual Spring Cleaning of Your Writer Self! (And share a picture!)


This is Bruce's expression at your suggestion that we clean something today: 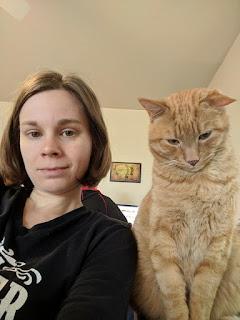 
Hm, I have no idea who has/n't done this yet. I'll tag ... Laura Grace, Carrie Anne Noble, and Kellyn Roth, but only if they really want to. I'm chill like that (Bruce is chill, too. Just look at him)


1. Dust-bunnies and Plot-bunnies: Reorganize Your Writing Goals (Or Make New Ones)

2. Which Stage Are You At? Expound!

a. Remodeling layouts (planning the story)
b. Painting the walls in colorful hues (writing)
c. Polishing the windows and scrubbing the floors and putting flowers in vases (editing)
d. Blueprints (not to the cleaning or remodeling yet… just drawing up plans for the very beginning inklings of a story)
e. Some combination of those things (cleaning out a closet)

3. Treasure From the Back of the Closet (Share one to three snippets you love!)

3.5. Bonus: Do Some Actual Spring Cleaning of Your Writer Self! (And share a picture!)


1. Link back to the person who tagged you
2. Share the picture
3. Answer the questions (naturally…) or even pick and choose which ones you answer
3.5. Tag 3 other writers and inform them that you tagged them (via comment/message/email or hey, even carrier-pigeon or smoke signal; I’m not picky)