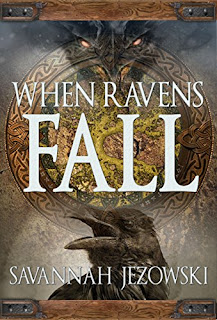 When Ravens Fall by Savannah Jezowski


It is the age of dreams.

When Kenna, the raven, foresees a girl in the Mist, she believes she has finally found the one to break the curse. That has always been her mission, since the day her misguided anger cast the curse than engulfed both her and Odin's son, Baldur, complicating what was already an impossible nightmare. But the girl she sees in the Mist is different than the others who have come for the Trials, than the others who have failed and returned home terrorized by their experience. This girl actually wants to be here.

Astrid, the dragon slayer's daughter, has a plan of her own. She is not interested in dreams and curses. There is only one thing that she desires, and falling in love is not it. After all, some girls were never meant to fall in love.

Baldur, the bear, inherited the gift of dreams from his mother. His dreams are consumed with the one event in his future he cannot seem to escape: his death. For years, he and the Raven have tried to find a woman capable of loving him in spite of his monstrosity, and for years they have failed. The roses are dying and the sky burns red like fire. The times tell the tale of the end.

And the end is always the Dragon.


I wasn't sure what to expect when I started this book. The set up seems very much like it is aiming at a Beauty and the Beast tale, but a few chapters in you get a sense that this should (and without spoiling too much, does) take it in a different direction, which I liked.
There is a great sense of atmosphere to this book's writing, but it is a complete fast moving tale ... there are a lot of POVs for what is not a long book, and if I had one complaint it's that it could've spent a little more time in the middle developing the key relationships instead of just giving us the highlights--and as an impatient reader it is rare for me to go, "Oh, I wish that had taken longer." You're definitely given enough to understand all the characters involved, but it could've probably stretched the middle out for longer, especially considering how much page time was given to the actual climactic battle (though another reader quirk of mine is that I'd much rather read a conversation than a battle any day, so that's probably very much a personal taste thing.).