Thunder crashes. A blinding flash of lightning and our next author steps from the shadows. It's B. Muze! 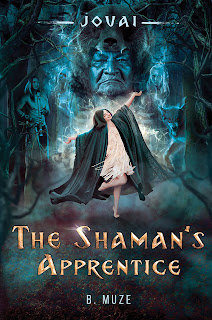 About the Author:
B. Muze is a quintessential American, with a racial background so mixed that most of the world is well represented in it, including several Native American tribes. Her childhood bedtime stories were myths and histories from all these many cultures, expanding the world around her into a place of constant beauty, magic and mystery. She has served the world as a Cultural Anthropologist, and as a daughter, sister, wife and mother. She is a voracious and wide-spread reader with a passion for writing from her earliest years.


Your life is being made into a movie. Who plays you? Who plays your love interest? (or who plays your arch-enemy?)
I would love to see Sandra Bullock play me. She looks nothing at all like me but the way she plays emotions, exasperation, etc. connects. Love interest: Dwayne The Rock Johnson! A sexy man with a sense of humor. Who can beat that? Arch enemy: Jim Carry. I’m sure he is really a good person, but the man plays awesome, funny bad guys.

What is your ideal writing space?
Imagine a beach at sunrise, rocky cliffs rising behind where seagulls and pelicans nest, with seals splashing around it’s stone toes. There is a whole, amazing world to discover in the tide-pools (where the “toe jam” in this analogy would be). It casts some shade when I want, as I sit in a seat sculpted of warm sand and let myself be lulled by the ocean’s song. No people, of course, but my pup is chasing the waves. Every so often he comes back to share my water and slobber on my work. That’s right. You may think those are my tears running the ink on that sad scene, but I’m going to claim it’s doggie drool.

Write me some Vogon Poetry (for those not in the know, Vogon poetry is so awful you'll want to rip your ears off and eat them. It's considered a method of torture in many corners of the galaxy. So give us your worst).
Ark indeel and smash the liver.
Squish. Squid ink bile.
Yellow.
Yum.
Now let us…kittens!

If you could grant one species of animal the ability to talk, which would you choose?
Cockroaches seem to be everywhere, so I think they might know some fascinating things. I’d love to hear more from them, as long as they don’t chatter all the time. On the other hand, strike that. There are too many stories they might tell on me.

Describe your life (or writing) as a film genre.
I wanted a romantic comedy or maybe action/adventure. Got the comedy part, at least, nailed. By the time my oldest kids were teenagers it became more of a melodrama with charming touches of horror. Now I’m fantasizing about fleeing to the Southwest and making it a Western.

What is the best dream you ever had? Alternately, what is the worst nightmare you've ever experienced?
My best dreams are of flying. I especially like the ones where I am swooping down and saving people who are drowning or in danger. Often, in these dreams, I’m surrounded by people who keep telling me I can’t fly, even while I’m doing it. In one dream, even the people I saved because I could fly then joined the others in insisting that I couldn’t fly. I found that curious.

In the worst nightmare I had, one of my children had been struck with ebola. I sent my husband off to take care of the others while I nursed that child, knowing I would die, probably alone with no one to care for me, but praying only that I would live long enough to care for my daughter through her death first. Unfortunately, the rest of the family returned too soon. I awoke before I knew if they had also gotten infected, or if I managed to live long enough so that my daughter didn’t have to die alone.

If you were to plan a "literary crossover" where the casts/worlds of two books (or series of books) were to combine, which would you choose and how would it go down?
The Jovai (Jo-va’-ee) series is a primitive fantasy. I would love to see a crossover with Frank Herbert’s “Dune” because it was Sci-fi, set in the future. It would highlight the fact that humans are human, regardless of our technology or lack-there-of.

Sum up your life in five words and two punctuation marks.
Adventure: in wonders and love!


Amazon.com where the book can be bought: https://www.amazon.com/Shamans-Apprentice-Jovai-Book-ebook/dp/B078QVJLQR