Our next author arrives on an ocean liner. She's KELSEY GIETL!


Kelsey Gietl is the author of the Hope or High Water series, historical romance set during the 1910’s. Across Oceans, the first book in the series, is now available online, and book two, Twisted River, is anticipated for the end of 2018.
Born and raised in St. Louis, Missouri, Kelsey Gietl grew up with a love of books and excessive use of her library card. She earned a Bachelor of Fine Arts in Theatre Design and Graphic Design from Stephens College in Columbia, Missouri, and has made a career in fields from event planning and proposal writing to product management and communications. In her free time—when she’s not writing, reading, or researching—she enjoys yoga, musical theatre, beach vacations, and gallivanting around St. Louis with her amazing husband and two beautiful children. 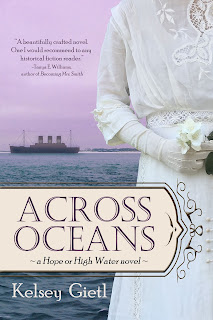 If you had the honor of naming something really big (a country, a spaceship, a planet) what would you want it to be and what would you name it?
Well, in my novel, Across Oceans, I named a steamship Hollenfeuer (translated from German as Hellfire), which I think would also be a pretty darn good name for a spaceship. Can you see it blazing a trail across the universe, charting new planets in the name of Earth? We’ll paint some flames on the side and the flag of our united Earthling tribe. It’ll be awesome.

If you favorite historical era had an ice cream flavor made in its honor, what would it taste like?
My favorite historical era is also the one my Hope or High Water series is set in - 1910’s. Most people tend to only remember the glitz and glamour of The Gilded Age. But this was also a period of hard fought reform in America - new awareness of child labor, safety laws after the Triangle Shirtwaist Factory fire, the introduction of income tax, and continued battles for women’s suffrage. If this time had an ice cream flavor, I think it would take after one of my character’s signature drinks: coffee and molasses, a perfect blend of bitter and sweet.

If you had to communicate with an alien presence in a non-traditional way (like, for instance, interpretive dance) what would be your method of choice?
Do you remember Magic Eye images? They made entire books of those pictures and no one could ever see anything within them. Supposedly in the middle of all that color was a picture of a horse? Suuuure. Let’s come to an agreement right now. Those things were definitely of alien making. It shouldn’t be too hard to send messages right back.

Which of the following potions would you like to possess: a Love Potion, a Sleeping Potion, an Invisibility Potion, or Coffee?
While I think invisibility would be the most useful, it would probably turn me into a terrible introvert (even more than I can be already), so I’m going to choose Sleep. When people at my day job get too cranky, I’ll just offer them a nice little nap and make the office a much happier place.

If you had a store, what would you sell?
Not technically a store, but I would build an open air library on the beach. Let’s not get into semantics on humidity’s effects on paper or possible mold levels. We’ll pretend that in my fantasy world, those are non-issues.

I know exercise is good for me, but it is not entertaining. What methods do you suggest for making workouts more fun?
People tell me there’s this thing called a runner’s high, so I should take up running. “It just as fun as a Zumba class!” Um, I’m sorry, but no. Zumba doesn’t make me feel like I should call a priest for last rites. So here’s what I say: find what you enjoy. If you don’t enjoy it, you won’t do it. So, if you want to go to one of those trampoline gyms and bounce for five hours - go for it. If you enjoy strip cardio, hey, who am I to judge? And if you happen to discover how running is actually fun, well, slap on the headphones and run an extra mile for me, won’t you? I’ll be over here contorting my body into unnatural yoga poses and enjoying every minute.

You have to trade places with one of your characters for a day. Which and why?
Hugo Frye, from my upcoming novel, Twisted River. He’s a photographer who used to travel across the United States to all the World’s Fairs and other exciting locations. Due to some personal complications, he’s forced to take a hiatus from his travels within the story, but who’s to say he may not get the chance again? Hmm...

If you had to board yourself up in a store to wait out the apocalypse, what store would you choose?
I would definitely hunker down in an Amazon Fulfillment Center (It’s an online store; it counts!) Have you seen those places? They’re enormous so plenty of room for all my friends and family, have very few windows so easier to defend than a storefront, and they sell EVERYTHING.

If this question were any question in the world, what question would you want it to be and how would you answer it?
In my Hope or High Water series, one of my characters believes you can learn more from one question than any other - “If you could redo any one day in your life, when would it be?” I know it sounds cliché, but I wouldn’t change anything. There are days I’m not too proud of, words I could have chosen better, and times when I couldn’t see the sun through the clouds. But if I changed them, I wouldn’t be me, my husband wouldn’t be him, my children might not even be here. We mess up, but it makes us better. That’s how my series found it’s name. Life isn’t always perfect, but we always have a choice on how we respond. Between hope or high water, choose hope.